Klan Parenthood moves to switch from Plan B to ella abortifacient…

After years of Planned Parenthood pushing the [so-called] morning after pill, they have turned on Plan B One-step, admitting what Pharmer has been saying for years,  that it’s very ineffective.

A comprehensive review of PP’s new strategy and the failure of the abortifacient Plan B to reduce pregnancy rates  is available at Jill Stanek’s blog. 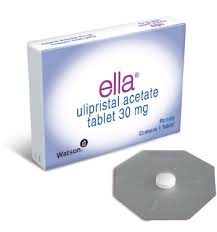 Once again, ESH asks his viewers to note the subtle, minor stereochemistry differences between the abortifacient analogs, mifepristone/Mifeprex and ella (ullapristal):

“Back in 2010, Pharmer brought to your attention the CHMP assessment report, filed by the manufacturer of Ella One to  Europe’s version of the FDA. and explained some of the features of the pill.

“Initially mentioned was that Ella One, which is called Ella in the U.S. is not very effective, and that the embryocidal dose of the pill is lower than the dose required to stop ovulation, demonstrated in the animal trials.

“Also from this report, is the information that the 30 dose is designed for 60 kg (132 lb) women, is designed to deliver  the 0.5mg/kg dose which the manufacturer stated  to be insufficient to stop ovulation, but effective against pregnancy.  This dose is not sufficient for larger women, and so Ella has  similar efficacy problems as the various forms of Plan B and Plan B One-Step (levonorgestrel).”

So, we have both false advertising of Plan B and ella–both are deadly for babies and often injure moms–as well as a money scam of the greatest proportions from the largest domestic terrorist organization, PP. They are buying these drugs for pennies on the dollar under the faux buying scheme perpetrated by the feds called 340B pricing. This is something your normal RETAIL pharmacy on the corner can never “get in on the deal”.

Then they turn around and bill that same government back for full on retail plus, bilking the taxpayers of hundreds of millions of dollars annually.

Welcome to the Kenyan kommie’s Amerikka!

[…] discussed at great length by ESH and other sources for decades now. These would include the Pill, Plan B, ella, various IUDs, Norplant, Implanon, Depo Provera, anti-hCG vaccines, and other products. […]

A Nurse's Perspective on Life, Healthcare and Ethics

Life, Liturgy and the Pursuit of Holiness

The writings and observations of a cantor serving in the Carpatho-Rusyn Plain Chant tradition.

Commentary on all things Catholic, Roman that is!

How our healthcare system is killing and harming us